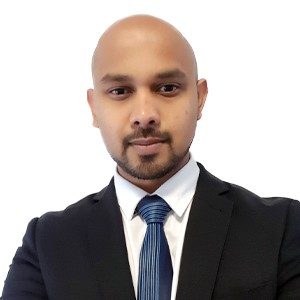 Shiraan is an experienced Program Leader with significant experiences in leading some of Australia’s largest digital programs. He has worked extensively in delivering industry leading B2C digital programs and brings with him experiences in large scale agile transformation, strategic program delivery and multiple experiences managing in-house or vendor-built software development initiatives. He is a skilled and passionate people leader with experiences in building E2E delivery teams that are able to adapt and succeed in complex environments. Prior to joining Seven consulting, Shiraan held a number of leadership positions including Project Manager, Iteration Manager, Program Manager and General Manager.

As General Manager at Telstra, Shiraan executed organisational strategies resulting in an exponential growth of program backlog with over 6 Agile release trains producing monthly software releases across numerous asset portfolios. As part of these strategies the programs of work grew from delivering 300k of initiatives to over 45m and an average of 95 projects a year. With strong experiences in Agile and Offshore development, his strategies produced a reduction in costs by over 20% and aided in building an agile organisation with the ability to flex-up and down to meet demand. As a passionate supporter of continuous improvement, a core pillar of his teams were the ability to adapt to change and succeed in complex corporate, project and system environments. His teams continue to be acknowledged as high-performing, fun and innovative teams delivering some of Telstra’s key strategic programs. As a passionate people leader, he actively mentored and promoted staff producing multiple staff Excellerate awards, long staff tenures and very low turnover.

As Program Manager at Telstra, Shiraan scaled the team from 13 resources to over 100+ resources across three countries and 6 sites. He transformed the team from traditional processes into high-performing agile teams delivering high-value software on a continuous basis. His team was recognised as one of Telstra’s most matured IT agile divisions and encompasses mature agile culture, mindsets and methodologies. As program manager, Shiraan hired the key resources and built a strong “can-do” team culture resulting in highly passionate, customer focused, sales driven teams.

As Program Manager at Telstra, Shiraan led some of Australia’s largest Digital Programs from concept through to post-production support. His programs include Australia’s #2 SmartPhone utilities app, #1 Tablet utilities App and Global Top 20 digital assets. As a digital leader he provided leadership in driving foundational digital capabilities such as DevOps / E2E Automation and Cloud-based scalability. On the R&D side, Shiraan has been part of programs delivering pioneering technologies such as Wifi Mesh/ Bluetooth Beacon / IoT / ChatBots / Voice and AI. As a passionate technologist, he also drove the formation of Brainwave innovation incubators which linked his teams to well established university programs.

As General Manager at Telstra, Shiraan lead a team of program managers in delivering a core portfolio of Telstra highly publicised 2020 Digital Vision. These applications include amongst others, Telstra Air – a nationally rolled out hardware and software program delivering seamless mobile wifi services, HomeDashboard – A customer-centric designed app creating seamless in-home experiences and Telstra Locator – Australia’s largest IoT finding network. Under his management, these programs were able to quickly ramp-up and incrementally deliver value to market resulting in Go-Lives as early as 3 months from formation.

As Lead Project Manager at Telstra, Shiraan delivered a significant portfolio of projects with a proven ability to manage up-to 14 concurrent projects. Some of these projects include the Mobility Acceleration Programs (1.0, 1.1, 1.2) in which he drove the projects through the financial and benefit modelling as well as the delivery of project benefits to market. As Lead PM, Shiraan also delivered the first version of Telstra 24×7, TFM, Snapp. Shiraan also led the formation of Telstra’s Cloud Platform and delivered the solution and costing phase for what would become one of Telstra core strategic pillars

As Senior Project Manager at Sirca, Shiraan enabled the legal and corporate separation of Sirca into two organisations. He was responsible for the Project Management of a C-Level project team including a high-profile board of directors. Within this role, he effectively drove his project team through the regulatory processes and achieved a zero-impact separation of Sirca.

As Business Analyst and Project Manager at Woolworths, Shiraan managed the delivery of the SalesLogix CRM system including process analysis, process implementation, training, product support and light touch in-house development. Other projects he ran include assisting with Woolworths Metro Transport Model implementations. He was also lead PM for the Pyramid Workforce Management system which included the management of an in-house development team as well the subsequent implementation across a highly complex and unionized Woolworths Logistics workforce.

As Finance Administrator at Cisco, Shiraan managed the divisional finances for Cisco’s ANZ Facilities team. With responsibility for a USD 20M+ budget Shiraan was in charge of maintaining financial diligence and improving divisional budgets allocations. Within this role he applied technology to the tasks ultimately building an IT system with supporting processes that automated workload and reduced budget variances through improved metrics and effective workflow.